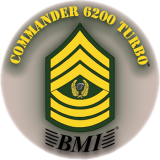 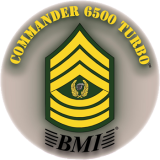 In late 2015, when the US Military decided to switch from the HMMWV in favor of the new front line military vehicle (the Oshkosh built JLTV) Banks abandoned their prototype “Hod Rod Humvee” project, leaving the military and civilian owners with (still) no way to upgrade their non-turbo HMMWV’s to the power of a turbo. Since the Banks Hummer turbo kit is not to be, starting in 2016, BMI invested the R&D to develop a kit of our own. These kits are simplistic, yet effective in their function, utilizing purpose-designed proprietary parts to achieve a straightforward install with minimal modifications to the factory set-up.

Keeping with the military theme of rugged simplicity, the kits employ all-mechanical controls, with NO ELECTRONICS.

With many non-turbo HMMWV trucks being auctioned off to the public, civilian owners are demanding more power and better drivability from these trucks. BMI answers that call with a proven turbo kit to upgrade these venerable (but underpowered) Hummer warriors.

The Commander 6200 & 6500 turbo kits can offer unrivaled power increases that so many Humvee and H1 owners are looking for, without sacrificing fuel mileage, engine longevity or reliability of the original drivetrain or having to spend $15k-30k+ on a new engine.”

Trucks equipped with aftermarket A/C systems may require moving the compressor (if it is mounted in an area where the new turbo needs to go). Generally, this readily achievable with modification to the compressor brackets, however this task should be considered before the install is attempted. The easiest way to accommodate any air conditioning system for use with the turbo kit is to use the GM R4 compressor (AKA pancake or rotary style compressor). Most of the serpentine belt equipped trucks already have the (crescent shaped) R4 compressor bracket pre-installed by AM General for this purpose.

If your HMMWV has an aftermarket Red Dot A/C system installed, this kit will require moving the compressor completely or (easier yet) changing to the R4 compressor.

A NOTE ABOUT INTERCOOLERS:  With the 6.2 and 6.5 being 21:1 compression engines, boost pressures above 14 psi are not recommended. An intercooler is not necessary (or practical) below 14 lbs of boost. The turbo output air temperature at these pressures is simply not as heated as it would be at higher boost pressures. This being the case, an intercooler on the HMMWV would only serve to add additional turbo lag and reduce the boost pressure by about 2psi (as measured at the engine).

The engine actually runs cooler with the addition of the turbo (under normal driving conditions), but if pulling a load often, then cooling system upgrades could be considered. The HMMWV’s just don’t get heated like the pickup trucks with the 6.5’s do, due to the better ventilation around the engine and the better radiator fan & fan clutch. 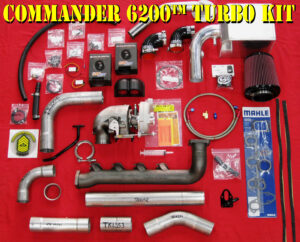 Click HERE to see the journey of our multi-year development of the Commander™ Turbo Kits.

Click HERE to see pictures and videos of the Commander™ Turbo Kits installed on customers vehicles.